One of the most amazing supernatural miracles that occurs repeatedly in this Garden park is the sudden appearance of Angel Orbs (Ezekiel 1:15). Thousands of strange balls of light have appeared in photographs over Believers.

Normally, the orbs show up during worship, praise, or prayer to God through His son, Jesus Christ. These bubbles of light can be photographed best at night. However, they can also be captured in the daylight if a flash is used. The spheres range from almost transparent to solid, opaque white. Occasionally, they have pale colors. I have even photographed orbs with four rings comprised of dots that look like eyes, just as described by the Old Testament prophet Ezekiel. 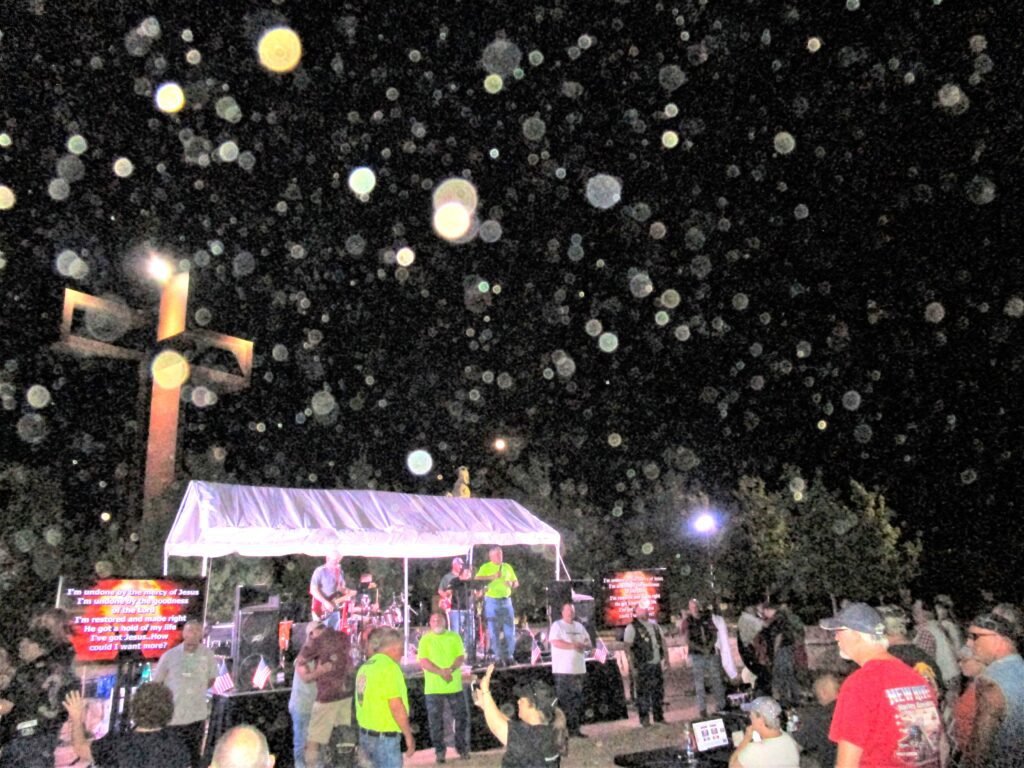 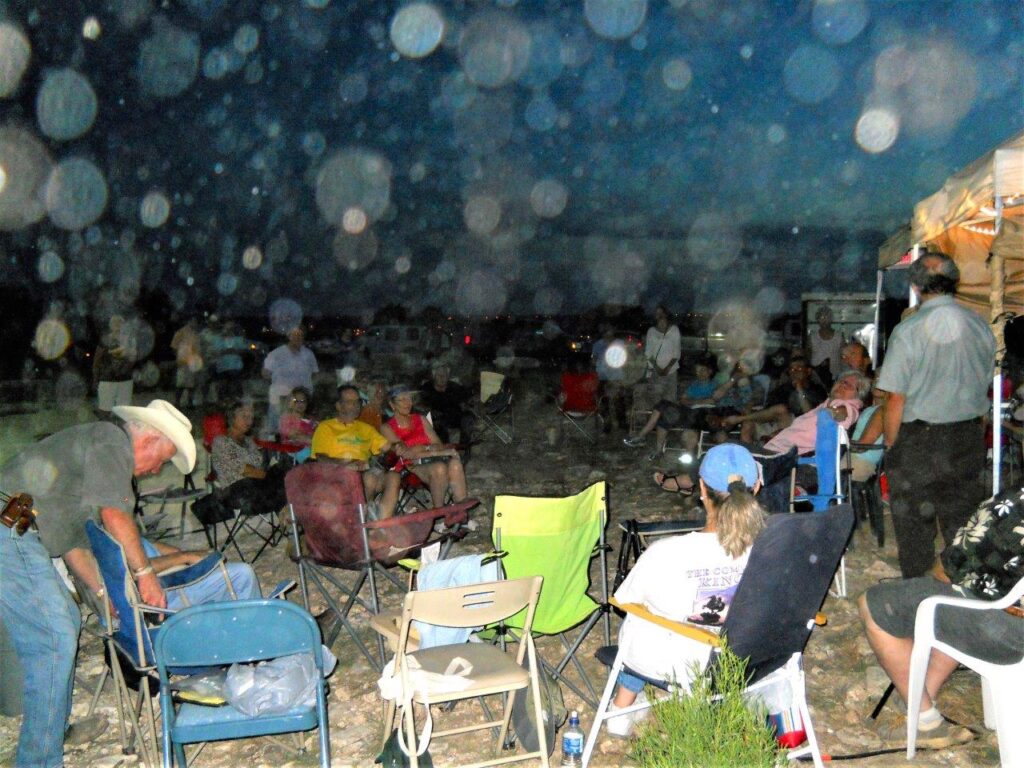 Orbs usually appear as very faint, transparent, almost invisible spheres of light. However, they can also be very obvious in photographs, to the point where they become a solid, bright white light. Many times the faint “halos” of light appear in the same photograph along with the smaller, dense, solid white Orbs. In some cases, a delicate internal structure shows four concentric inner rings, with dots or “eyes” scattered across the Orb surface. Usually, it is impossible to determine the exact size of an Orb in a photograph, since the distance from the camera lens normally cannot be accurately determined. The exception is when the Orbs partially appear in-between objects or persons.

The Orbs appear to range in size from several millimeters, to three meters in diameter. Photographs taken in sequence can be completely normal with no Orbs, and then the scene is suddenly filled with one to hundreds of these strange bubbles, with no changes in the atmospheric conditions. Orbs of light are being photographed indoors and outdoors, in total darkness and in daylight, at locations all over the world, with all kinds of cameras and flashes.

Hundreds of Balls of Round Light have been captured with flash photography by dozens of people at the “The Coming King® Sculpture Prayer Garden” and near “The Empty Cross” in Kerrville. It is believed that these transparent Orbs are the type of angel described 4,000 years ago by the Jewish prophet Ezekiel (Ez 1:15-21) since many appear to have four “rims” and “eyes” all around.

I (Max Greiner, Jr.) first became aware of the Angel Orbs on September 15, 2005, when Prayer Intercessor, Margie Osborne, sent me photos of Angel Orbs around her father and grandchildren when he received Christ in Colorado. Then in 2006, the pastor of Impact Christian Fellowship in Kerrville, David Danielson, sent me photos of strange balls of light floating around the church sanctuary. The transparent orbs were captured in the pictures taken for the new church website.

The moment Sherry and I looked at the Impact digital photos on my computer screen, the Holy Spirit told us these were the type of angels referred to by Ezekiel. Later, after taking photos of thousands of round balls of light, the Holy Spirit woke me and said to write a rational, well-illustrated essay explaining the phenomenon. He wanted to use it on my art website to bring thousands of people to Jesus. His target was sinners lost in the occult, witchcraft, New Age, and false religions.

Therefore, in 2007 I wrote an evangelistic Angel Orb essay and posted it on my Greiner art website, in the “God Stuff” section. Countless numbers of people have seen my dramatic orb images and read my evangelistic essay. I still may have the best photographs and Biblical explanation of the orb phenomenon on the internet. The Holy Spirit directed people to my essay after orbs started appearing in their own photographs. For years, my essay was at the top of all the internet search engines. I used this rare opportunity to reach the really lost for Christ.

So, what are Angel Orbs exactly? After years of praying, researching, and photographing thousands of these strange balls of light, I believe they are angels, God’s angels. Angel Orbs are made of something which reflects light.

Apparently, they don’t emit their own light. Many times they have appeared at my request, in daylight and dark. The orbs can float motionless in the air or move at a high rate of speed. We have viewed many videos of the orbs moving through space over the years. We posted our own video taken at Impact Christian Fellowship which shows the Angel Orbs flying through the sanctuary. I have also photographed the Angel Orbs hovering over our vehicles, large Christian sculptures, floating over our studio home, and even over Sherry’s pet wild animals in the Texas Hill Country.

The phenomenon is real. It is not a digital camera anomaly. Remember, all cameras at times will create light flares due to bright light entering the lens. I have a photo of an Angel Orb hovering over one of my California Prayer Intercessors, Deb Fry, in a family photo from the sixties. Film cameras were the only option back then. So, orbs are not a product of digital cameras. Digital cameras are just better tools to photograph Angel Orbs, just like microscopes and telescopes are better tools to observe things that can’t be seen with the naked eye.

Since the development of smart phones (such as iPhones and Androids) their software now automatically removes orbs and other perceived flaws from images. Only digital cameras without image correction technology can capture orb images. Therefore, I use Canon Digital cameras to take still photographs of Angel Orbs today.

However, smart phones do a great job taking videos of the Angel Orbs flying through the air. Simply pray, turn on the camera flash and take a video. Bobby Dendy, Worship evangelist and Prayer Intercessor, was the first person to inform me that Angel Orbs could be captured on video using smart phones. He was also the first to send me photographs of gigantic Angel Orbs floating over “The Empty Cross” in Kerrville. Orbs usually appear to be the size of golf balls up to beachball-size.

Remember, God has always used miracles, signs and wonders to capture the attention of humans. He never stopped and God’s Garden in Kerrville is a wonderful place to photograph Angel Orbs. God’s angels are everywhere. They are around you and your family now. Let me remind you, however, only worship God, not angels. As a warning, so you are aware, Satan’s fallen angels can be photographed too, in occult situations. They are not demons, which are terrestrial. If you don’t know what you’ve got in your photos, command the Angel Orbs to leave if they don’t serve Jesus. They will exit stage right …or left! If you get some good Angel Orb photos at God’s Garden, please send your high-resolution images to the TCKF office (office@ thecomingkingfoundation.org)!

Normal Lens Flares appear in sunlight. iPhone sun Lens Flares sometimes appear as a green dot. This has been verified as a separate phenomenon.

Newer phones automatically remove these as they consider them flaws.  Try and older phone or standard camera to catch your own Angel Orbs on camera. 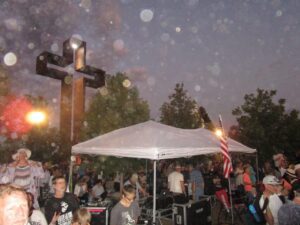 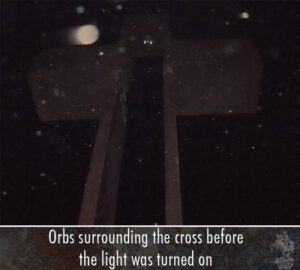 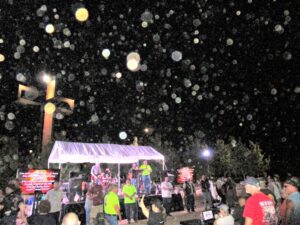 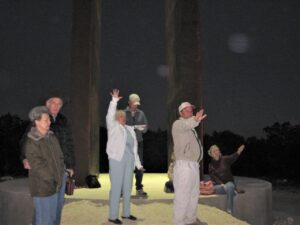 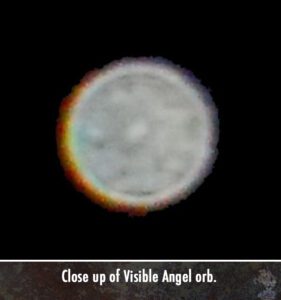 This is an untouched close up image of the same Visible Angel. 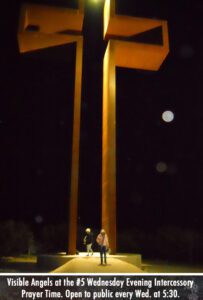 The #5th ever Wednesday Evening Intercessory Prayer Time at “TEC”. All are welcome every Wednesday night starting at 5:30 PM. Bring a CHAIR! 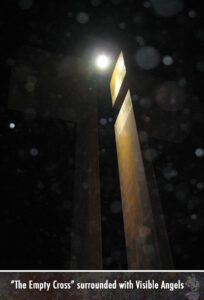 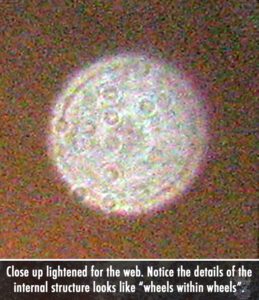 Close up digitally lightened to reveal more detail. Notice the interior looks like it has “wheels within wheels”. 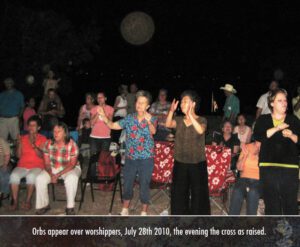 Angels often appear over worshippers. This was taken the night “TEC” was raised. 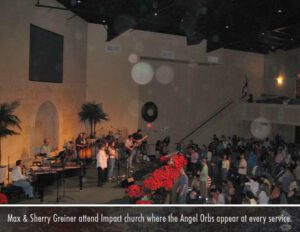 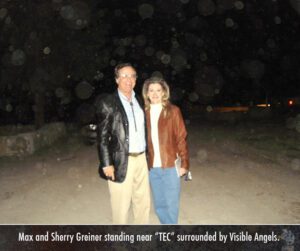 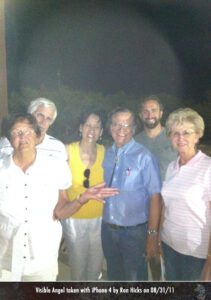 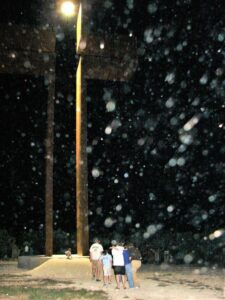 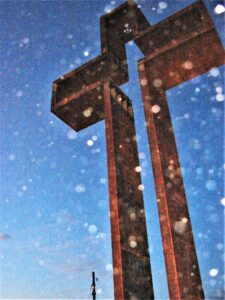 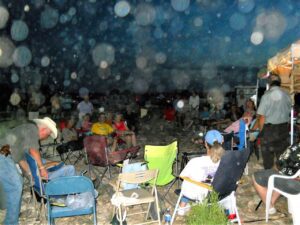 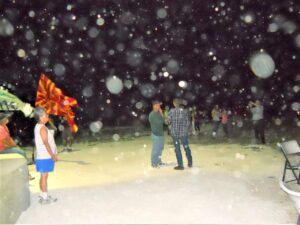 at the The Coming King Sculpture Garden in Kerrville, TX. 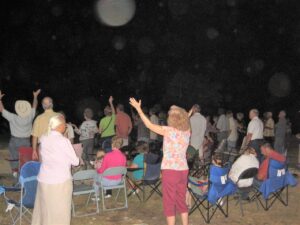 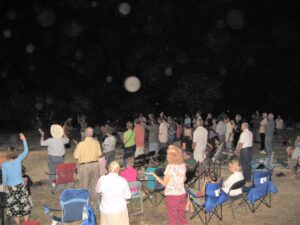 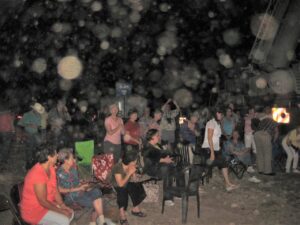 Worship Night during the Raising of The Empty Cross sculpture. 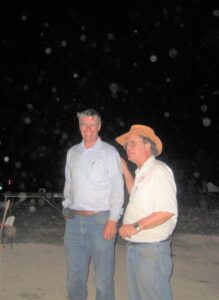 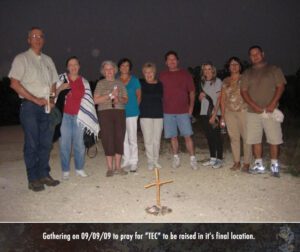 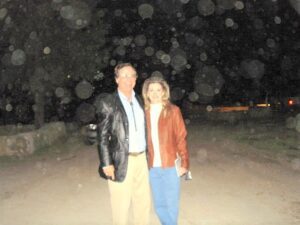 Enjoying the Lord’s Presence at The Coming King Sculpture Prayer Garden in Kerrville, TX during the first sunset of Hannakkah.